What Breeds Get Along with Goldendoodles? 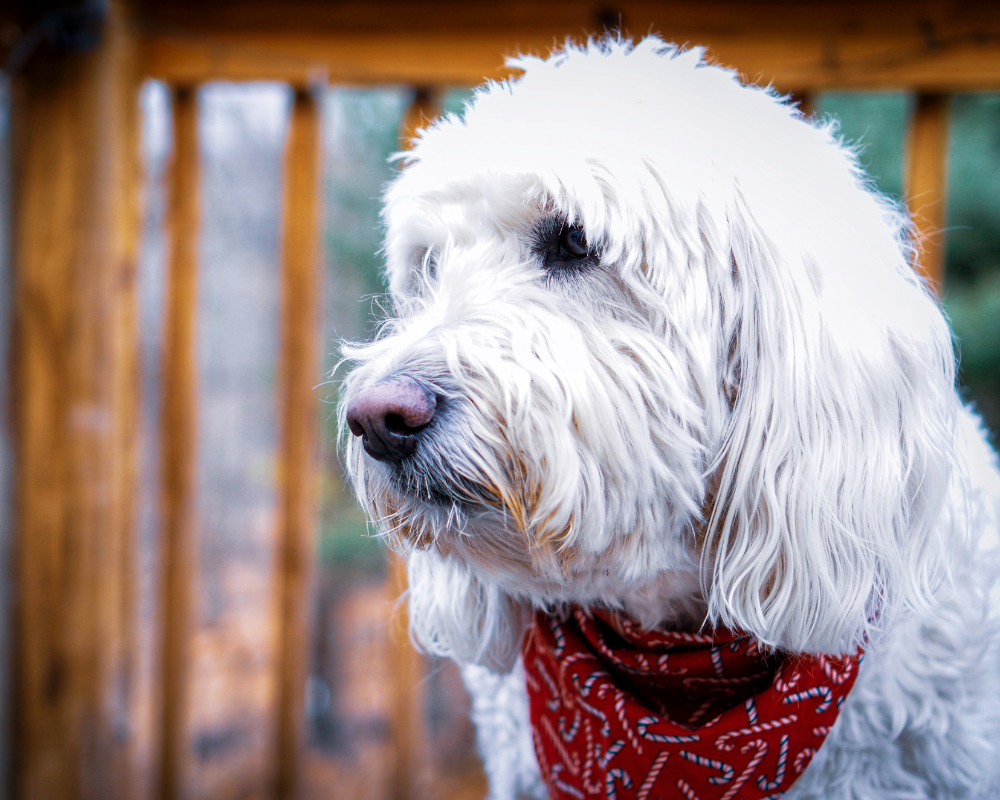 Because they are naturally friendly and playful, Goldendoodles get along with a wide variety of dogs. English Springer Spaniels, Bulldogs, Mastiffs, Komondors, Newfoundlands, Havanese, English Foxhounds, and Boerboels are some dog breeds that get along with Goldendoodles.

What Traits Mix Well with Goldendoodles?

Goldendoodles’ temperament, like their appearance, may be influenced more by one parent than the other. However, they are usually intelligent, obedient, and highly loving dogs. Goldendoodles enjoy people and get along well with other pets, and they are patient and gentle with young children, making them an excellent choice for families.

They are far too friendly to be good guard dogs or watchdogs, preferring to befriend strangers rather than warn them off. They need to be with their family because they are highly social dogs and would not do well as outside dogs or in homes where they would be left alone for long periods, which could cause separation anxiety.

What Dog Breeds Easily Get Along with Goldendoodles?

Regarding other house pets, the hybrid Goldendoodles are gentle and calm. These designer dogs rarely attack other dogs, but they can be envious if other canine creatures are patted in front of them. The following dog breeds may be compatible with your Goldendoodle.

The English Springer Spaniel is a charming, lovable bird dog with boundless energy, stamina, and intelligence. Sport hunters appreciate the dual personality of working Springers: handsome, mannerly pets during the week and dependable hunting partners on weekends. English Springer Spaniels are tough, muscular hunters who stand 19 to 20 inches tall at the shoulder and weigh between 40 and 50 pounds.

The double coat comes in various colors and patterns, the ears are long and lush, and the breed’s eyes have a kindly, trusting expression. Springers walk with a long, smooth stride that covers a lot of ground. Springers are highly trainable people-pleasers because they were bred to work closely with humans. They crave company and are unhappy when left alone. Springers are polite dogs who get along well with children and other mammals. They are excited to participate in any family activity. These rugged spaniels enjoy long walks, games of chase and fetch, and swimming.

The Bulldog is a thick-set, low-slung, well-muscled bruiser whose sour mug face is the universal symbol of courage and tenacity. These docile, loyal companions are equally at home in town or the country.

A Bulldog cannot be confused with any other breed. The loosehead skin, furrowed brow, pushed-in nose, small ears, undershot jaw with hanging chops on either side, and distinctive rolling gait practically scream, “I’m a Bulldog!” ‘The coat is short, smooth, and glossy and comes in various colors and patterns. Bulldogs can weigh up to 50 pounds, but that won’t stop them from trying to curl up in your lap. But don’t confuse their easygoing demeanor with laziness. Bulldogs enjoy brisk walks and require regular moderate exercise and a careful diet to stay trim. A Bulldog’s short snout can cause labored breathing in hot and humid weather.

The colossal Mastiff is a member of a canine clan as old as civilization. The Mastiff, a massive, heavy-boned dog of courage and prodigious strength, is docile and dignified but also a formidable protector of those they love. A face-to-face encounter with these black-masked giants can be startling for the uninitiated. A male stands at least 30 inches tall and weighs more than a full-grown man.

The deep and thickly muscled rectangular body is covered by a short double coat of fawn, apricot, or brindle stripes. The head is broad and massive, with a wrinkled brow highlighting an alert, kindly expression. Mastiffs are gentle companions and guardians who respond well to gentle training. Mastiffs are fiercely loyal to their families, and their natural fear of strangers necessitates early socialization and training. Mastiffs make wonderful pets, but getting a powerful giant-breed dog is a big commitment.

Mastiffs have traditionally held protective positions, so they may exhibit territorial behavior when exposed to new people, dogs, and other animals. Mastiffs are less active and playful than Goldendoodles and prefer to lounge around the house near their owners. This should be fine for a Goldendoodle, as they enjoy lounging around. The Mastiff’s calm and relaxed demeanor should complement the gentleness of a Goldendoodle. Both of these dogs may prefer different activity levels, but they are unlikely to be bothered by whatever the other dog does.

The Komondor is a powerfully large Hungarian flock guardian covered in profuse white cords from head to tail. It is one of the world’s most recognizable breeds. Training the independent and protective Kom requires a firm, experienced hand. Today’s Hungarian-language tip: Komondorok is the plural of Komondor. Let’s take a look at the dog now. We see a large and powerful guardian covered in a swath of white cords. A big male with heavy bone, a deep chest, and lots of muscle can stand more than 27.5 inches tall and weigh more than 100 pounds. Despite their bulk, Komondorok are quick and move in long strides. Koms are impossible to confuse with anything else due to their distinct appearance.

Compared to the other dogs on this list, the Komondor looks more like a hairy Goldendoodle. A Komondor should get along well with humans, Goldendoodles, and other household pets. The more constant presence of an affectionate Goldendoodle in a Komondor’s life may help to alleviate some anxiety. A Goldendoodle’s friendliness and easygoing nature should also appeal to Komondors.

The massive Newfoundland is a humongous, powerful working dog with heavy bones and a dignified bearing. The gentle Newfie is a well-known companion and has earned a reputation as a patient and watchful ‘nanny dog’ for children. Males can weigh up to 150 pounds and stand 28 inches tall at the shoulder; females typically weigh 100 to 120 pounds. The Newf head is majestic, with a soft and soulful expression. The outer coat is coarse and flat. Gray, brown, black, and a black-and-white coat named after artist Sir Edwin Landseer, who popularized the look in his paintings, are the colors.

According to the Newfie breed standard, the most important single characteristic of the breed is a sweet temperament. The Newf’s good nature is reflected in their fondness for children. Newfs are trusting and trainable, and they respond well to gentle guidance. These noble giants are among the world’s largest dogs, and getting a pet that could outweigh you presents apparent difficulties.

The only dog breed indigenous to Cuba, the Havanese, are cheerful little dogs with a spring in their step and a sparkle in their big, brown eyes. These vibrant and sociable companions are becoming increasingly popular among city dwellers in the United States. The Havanese is distinguished by a curled-over tail and a gorgeous silky coat in various colors. Some owners enjoy cording the coat in the style of a Puli, while others clip it short to save time grooming. Fortunately, Havenese looks adorable regardless of their hairstyle.

Havanese are ideal city dogs due to their small but sturdy bodies, adaptable nature, and social skills, but they are happy anywhere they can capture the attention of admirers, young and old. Havanese are natural trick dogs because they are intelligent and trainable extroverts with the comic instincts of a born clown. Havanese are also excellent watchdogs who take their job seriously while keeping their barking to a minimum.

The English Foxhound is a large galloping hound with a lot of stamina. His long legs are as straight and as strong as a gatepost. The back is perfectly straight. And the chest is deep, girthing up to 31 inches on a hound measuring 24 inches at the shoulder, ensuring plenty of lung power for a long day of hunting. These scent-driven, pack-oriented hounds are gentle and friendly but are rarely seen as house pets. A primal instinct can drive them to pursuit that they don’t care about anything else, including training.

Ownership of these noble creatures is best left to huntsmen who kennel packs of hounds or those who have experience meeting life’s unique challenges with swift and decisive hounds hardwired for the chase. The English Foxhound embodies everything serious dog breeders seek: beauty, balance, and utility. The long legs are as straight and as strong as a gatepost. The back is perfectly straight. And the chest is deep, girthing up to 31 inches on a hound measuring 24 inches at the shoulder, ensuring plenty of lung power for a long day of hunting. ‘Next to an old Greek statue, there are few such combinations of grace and strength as in a fine Foxhound,’ a poet wrote.

English Foxhounds, like Goldendoodles, are incredibly loyal and can make excellent companions for humans and other dogs. When combined with an active Goldendoodle, the energy of an English Foxhound should work well. Both dogs will most likely enjoy staying active and interacting with each other. English Foxhounds enjoy being around other animals and may thrive in a household with multiple dogs.

Boerboels are fearsome but discerning protectors of home and family who learned their trade while guarding remote South African homesteads against ferocious predators. They are dominant, self-assured, bright, and eager to learn. This sleek-coated avenger has a no-frills, no-nonsense demeanor, standing as tall as 27 inches at the shoulder and weighing as much as you. It is a descendant of the ancient molosser dog family, the foundation of today’s mastiff-type breeds, with a broad and blocky head, powerful jaws, and thick muscles from neck to rump.

Regarding their movement, the Boerboel may be the most agile of all mastiff breeds. The imposing Boerboel is dedicated to defending the people and places he cares about. Training and socialization should begin before a puppy matures into a dominant adult. This trainable, adaptable breed enjoys spending time with its adored humans. Still, a Boerboel may be far too much for an inexperienced owner to handle.

Please contact us with any questions or concerns you may have.

Your email address will not be published. Required fields are marked*